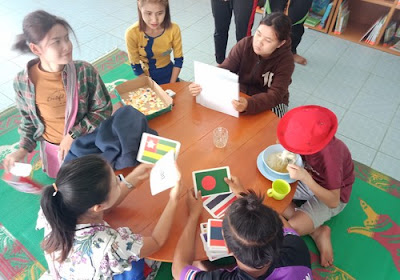 The YCW faces new problems in the post-industrialised countries of our region. As industrial development progresses it often happens that young workers suffer less hunger and poverty, and less material oppression. Instead they face new problems of control, individualism, isolation and stress. They feel powerless and often will not readily join action groups like the YCW.

This poses a new challenge to the YCW. It is of no value to say that young workers today will not join YCW, or that they are not interested in YCW action and meetings. As followers of Cardijn we have to reinvent the YCW to meet the needs and the problems of young workers today. We have to adapt our method to answer their situations.

Our next story tells of a neighbourhood group begun in a new area in Japan, a group that has achieved remarkable success despite these problems. Perhaps such a story can spark our imaginations and result in effective planning in our own areas.

Our group began in 1989 when the new priest invited three young people from the area to come together for meetings at his house. We did not know about the YCW and we were not told much about it. We did not know why this new priest was so enthusiastic about our group. We did not know what to do in the group. The priest told us only one thing – that this group is necessary for our growth.

One important factor of our success is that we have always focused on one most important thing, and that this is the emphasis of all that we do, until we change the focus. During the first year the focus was to widen the group.

We were all made to be very sensitive about inviting new persons to the group. This was the most important work. We were not very good at this work, we were not outgoing people, but we did our best. When a new person came, they were treated with great welcome and included in everything. They were given the opportunity to stimulate what was talked about at the group.

It was only in the process of evaluating our work that we came to see the meaning of what was being achieved. At first, we only felt a sense of duty or loyalty to our chaplain, but this developed. We became autonomous in our orientation and we widened our view.

We would meet every Tuesday. The focus of our meeting was widening our group. So, we would talk about our contacts and their situations and problems. We would talk about our weaknesses in contacting, our shyness and selfishness. Soon we were making an analysis of society and our action was centred on our own life. This is how we evolved or developed ROLWA.

By this time, we were involved in organising activities also, activities to recruit and involve others. Sometimes this work took over from ROLWA. So, we made a decision to have only ROLWA on Tuesdays. By this time there were ten in the group, seven young workers, one priest, one Sister and one adult collaborator (a married man who works as a truck driver).

Then, in mid-1990, our chaplain went away for six months. It was a crucial time for the group. The leaders had to take the responsibility. The absence of Father made the group feel unstable, they were a bit lost, but the members cooperated, discussed a lot and overcame this problem. Eventually this absence bore fruit, the group became more autonomous and responsible.

In 1991 the group increased to 22 young workers and three collaborators. We began to invite young workers by mailing and handing out flyers and talking to youth after Mass. We published articles about the YCW in the diocesan newspaper.

By 1993 the group had increased to 33 young workers. The focus of our action also changed. The focus now was on two points; the growth of each member and getting to know well the new persons in the group. We decided also to extend the YCW to South Osaka. Now also we began to hold bigger activities: a Christmas party (attended by more than 70 youth), a beer-party (held in an open-air place on the top floor of a department store), and many training/study days. The members were very busy with all these activities. However, they always continued their ROLWA, discussing about their lives and evaluating their work.

By 1994 the group had become very large. We decided to divide the Leaders group into four groups doing ROLWA. There were many difficulties – it is not easy to divide into groups. There was a lot of conflict in the group, but it finally achieved even greater unity. At the same time there were so many contacts to work with – and much work to be done in organising activities and training sessions. It was the leaders that took responsibility for it all.