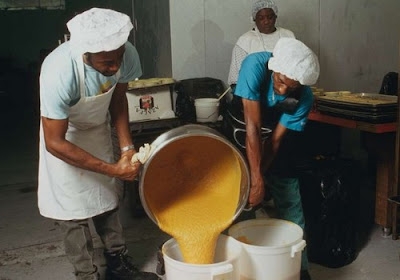 The English language has a phrase to describe things that are not comparable. It says that they are ‘like chalk and cheese.’ You cannot mix chalk and cheese – and if you did it would not make a very tasty meal.

Suppose then we bring together a rubber tapper from India, a factory worker from Indonesia, and an insurance clerk from New Zealand. It would seem that their work situations are ‘like chalk and cheese.’ How could they sit together to discuss their problems as workers? What is the basis of their unity?

These questions are important for two reasons.

• We need to be clear about the orientation of the YCW; what it aims to achieve and what sort of action it takes.

• We also need to be clear about whether this orientation and action excludes some young workers from belonging to the YCW and, if not what is the basis for unity among workers who face such different situations.

It is worthwhile to firstly look at how different today’s situation is from the situation in Cardijn’s time. The industrial revolution was a time of great change. Before the workers used to work in small family workshops. Now suddenly these small workshops were closed and in their place were large factories.

Before, workers knew well and often lived in the same house as their employer. Now the employer was a rich man remote from the workers. He employed so many workers that he did not even know their names. Before workers were artisans. They were known by their trade and accepted and esteemed in their villages. Now they were just a mob, newly arrived in the city, living in shanty houses, with nothing to offer but their labour.

There was a name given to this new large group of workers – these people who left their villages and came to sell their labour for wages in the factories. They were called the ‘working class.’ The problem they all shared was called the ‘worker problem.’

As time passed, workers realised that they could not fight these problems alone. They united to struggle for their rights. This is how the first unions were born. Immediately there was opposition. Unions were suppressed. The army and the police were called out. Workers were imprisoned, deported, shot at and killed. The general name given to all these groups struggling for workers’ rights was the ‘worker movement.’

Many young workers in Asia understand the workers’ situation in Cardijn’s time very well. It is exactly their own situation today.

In Sri Lanka there are large zones set apart for factories Vouna women leave their villages to come and work in these factories. They work long hours frantically serving machines. They sleep in crowded sheds without proper water or toilet facilities. Similar conditions exist in many other countries.

And when workers unite to demand human conditions and wages, they too experience opposition and oppression. Young workers in Thailand, Philippines, Indonesia and other countries know the experience of harassment by army and police as they stand on a strike line. They have experienced fear as they see their leaders kidnapped, tortured and killed.

There are many other countries for example India, Pakistan and Bangladesh where factory work does not employ a large percentage of young workers.

In these countries many young workers are unemployed. They suffer hunger, misery and a life of frustration. Others try to make a living as entrepreneurs. For example, they sit on the roadways selling handkerchiefs, or set up a business delivering milk on a bicycle. These people are not wage earners but are they workers?

Many agricultural workers work for landlords. They do not own any land. They are paid mainly with a small share in the rice harvest. Brick kiln workers are bonded labourers working only for survival supplies. Can we call them workers?

Many factories have moved to countries where labour is cheaper. In those that remain manufacturing has become more specialised. Workers need more education and skills. The result is that there is great stress and competition among workers to upgrade their skills.

The loss of manufacturing industries has led to much unemployment. Many young workers are doing part-time or casual work. These workers often must work while others play, and, because they are casuals, they work with different people every day. This has caused isolation.

Because of the pressure on the job market, many workers feel insecure at their work. They start to live only for today and find it difficult to commit themselves to any long-term project. This leads to individualism and competition.

In some countries and languages, the word ‘worker’ is used for factory workers only. And so, in these countries many young workers no longer identify themselves as workers. Can we say that they are still a part of the working class?

It is these so different work situations that pose questions for the YCW. What, today, do we mean when we say that we are a workers’ movement? What is it that unites us? A common situation, or a common vision, or both?

The industrial revolution put a lot of power into the hands of a few people, the new entrepreneurs who set up factories. Because of ‘Economic liberalism’ (which said wages and conditions of workers could only be determined by market forces), this was power without responsibility. This opened the doors to allow the problems of wages and conditions experienced by the workers of that time.

As time went by, machines grew bigger and more powerful – and more expensive. The numbers of people working for wages increased. The firms grew larger becoming first national monopolies and then transnational corporations. This put even more power into the hands of even fewer people and still without a philosophy that demanded true responsibility.

It has reached the stage where those who make decisions are so remote from those who suffer them that they are often unaware of the results of their work. Alexander Cockburn wrote in a 1984 issue of ‘The Nation’:

“Every time Paul Volcker (Chairman of Federal Reserve Board) puts the prime rate of interest up 1 point, $4.5 billion is added immediately to the Third World debt. He might as well take several thousand Asian babies into a field and machine gun them. But (at least as far as I know) Volcker is not personally a murderer.”

In his valuable book, ‘Good Work’, Mr E.F. Schumacher says that there are four main characteristics of modern industrial society which, in the light of the Gospels, must be considered four great and grievous ills:

•  Its continuous stimulation of, and reliance on, the lethal sins of greed, envy and avarice.

•  Its destruction of the content and dignity of most forms of work.

•  Its authoritarian character, owing to organisation in excessively large units.

Following Cardijn and Pope John Paul II, the YCW believes that the organisation of human work is the essential key to the whole social question. It is the root cause of the problems of young workers from Nepal to New Zealand, from Pakistan to Fiji. The YCW is committed to struggle for a solution to this worker problem.

This is the first reason why we say that we are a ‘workers’ movement.’ YCWs face very different situations but they share a common problem, a common analysis, and a common commitment to find a solution to this problem.

Human beings need to work. We are born with needs that will only be supplied if we work for them. Our creative instincts lead us to take hold of things around us and transform them. As social beings we need to contribute and participate for the common good. We have gifts and abilities which we need to share, not only for the benefit of others, but also to grow ourselves. All of these things are the achievements of human work.

Work is so central to our dignity and our fulfillment as persons that it seems impossible to imagine a truly human life without it. The fact that the way work is presently organised makes it difficult to achieve these things does not excuse us from struggling to achieve a life of good and meaningful work.

Every young worker is a unique person with a unique life, gifts and possibilities. Every person makes their own special contribution to the world. It seems that, in the order of things, each was created with a purpose; a special purpose that makes us different from others a mission to fulfill. Thte YCW believes that this is so. This is why we place so much importance on what we do with our lives. YCWs meet to reflect on their work life, to understand more deeply their possibilities and their responsibilities in work. They challenge one another to take action in work life. This is the second reason why we say that we are a workers’ movement. No matter what work they do, or even if they are unemployed, YCWs have a common vision about the significance of work and their mission to be involved. They review their situations in their meetings, and they take action in work life.

Who can belong to the YCW?

Nobody is excluded from the YCW because of the position they hold in society or because of the work they do. If they accept the orientation and vision and are willing to work for the aims of the YCW, then they are welcome.

The YCW will also remember its vision that the way that human work is organised is a key factor in the whole social question. It will spend time enquiring about and studying the organisation of work. It will study deeply the enormous changes coming through technology and new methods of organisation especially in post-industrialised countries. And it will continually update its analysis about work, workers and worker organisation.

Finally, the YCW will always have a special interest and concern for the poorest and most oppressed of workers. They are the people most affected by the system. That is why they will have a priority in all our work.