Stories of the YCW

Stories from Many Countries

A pioneer of the YCW

The essence of the YCW is that it should be an imaginative response to the situations facing its young worker members. Cardijn would never allow that he was the sole founder of the YCW. He believed that the YCW had continually to be founded and re-founded in every situation. There are great stories of young workers who built and founded the YCW in every country and from every era of the YCW.

Alex Ericx was a young Belgian YCW member at the beginning of the second world war when the YCW was very young. He left school at the age of 13 and got a job building watch towers in trees to be used by the army. He had to work from 7am to 7pm six days per week. When this job was finished, he was unemployed and eventually took an apprenticeship. It was in the apprenticeship school that he met and joined the YCW.

Eventually he decided to start a YCW group in his own parish. He went to the parish priest to ask permission. The priest said, “But there are no young workers in this parish.” Alex did not argue but together with some friends he began an enquiry on young workers in the parish. They filled a book with names, addresses, age, place of work. Alex can still show you that book together with notes written on the back of German army orders papers.

After this Alex went back to the parish priest to ask again. The priest said, “But I have already told you, there are no young workers in this parish.” Alex then showed him the book and the priest agreed to give permission but would not give the help of a chaplain or a room to meet. The group began meeting in summer under a tree. When winter came, they met in a glass house, but they found it very cold – sitting on a wheelbarrow or a brick wall.

At the age of 20, Alex was asked to work fulltime for the YCW with the factory groups (category groups). He went to the most industrialised area, looked for and worked for three months in one and then another factory. He tried to get work as a maintenance man because then, with hammer in hand, he could easily move around the factory He would tell the YCWs, “Today we will eat our bread together.”

Alex will tell you also about the work of extending YCW on the trains. It seems that workers of every age had to travel a lot to work and mostly they travelled on the train. Many would travel one or two hours per day. The trains were cold and there was little light on them. And so, the YCW took on the work of extending the YCW and organising meetings on the trains. The members would organise to be on the same train and would have their weekly meeting as they travelled to work. Many actions were planned, and many leaders formed in this imaginative way. 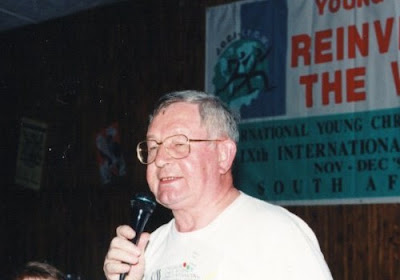